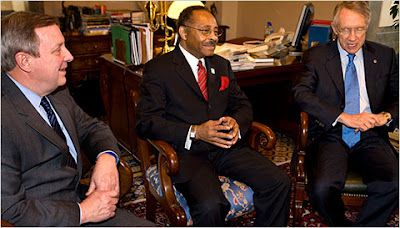 Recently, there has been a stimulating debate over whether Illinois’s U. S. Senator designate, Roland Burris, is entitled to fill the Illinois Junior Senate seat after embattled Illinois Governor Rod Blagojevich’s appointment on December 30, 2008. Majority Senate Leader, Harry Reid, is stating that Illinois Governor Blagojevich’s appointment is tainted and is not valid because of Blagojevich’s recent arrest and federal complaint brought by the Federal Bureau of Investigation (FBI). With all due respect to the Honorable Harry Reid, his argument is more political than legal and shows his preferences in trying to determine the outcome of who should fill the Illinois Senate seat. Unfortunately, Senate Majority Leader Reid, who is a lawyer, should know that Burris is legally entitled to be seated as a U. S. Senator from the state of Illinois.
U. S. Constitution Denotes Senate Appointments as a State Right
The U. S. Constitution denotes the senate appointment after a vacancy as a specific state right not one to be manipulated by congressional leaders. The specific constitutional provision that addresses the replacement of vacancies in the U. S. Senate is the 17th Amendment of the U. S. Constitution. 17th Amendment, Clause 2 states “When vacancies happen in the representation of any State in the Senate, the executive authority of such State shall issue writs of election to fill such vacancies: Provided, that the legislature of any State may empower the executive thereof to make temporary appointments until the people fill the vacancies by election as the legislature may direct.”[1] This provision is important because it specifically grants the authority of senate appointments after vacancies in the hands of the states, not Congress.

For Burris, Illinois Governor Blagojevich was still the formal governor of the state of Illinois on December 30, 2008. The Illinois legislature did not remove Blagojevich prior to the Burris appointment nor change the Illinois Constitution to allow a special election to determine the U. S. Senator appointment after the vacancy. Also, Illinois Governor Blagojevich did not resign his post. So, the Burris appointment is valid under the 17th Amendment of the U. S. Constitution.
Courts will likely Validate the Burris Appointment
For those students entering law school, you will likely get bombarded with the 1803 U. S. Supreme Court case, Marbury v. Madison, in Constitutional Law.[4] Well, the Burris appointment has legal backing because of this case. To summarize the facts of the case, outgoing President John Adams appointed William Marbury as justice of the peace for the District of Columbia.[5] President Adams signed the commission letter and affixed the seal of the U. S. Presidency and delivered it to Secretary of State James Madison for delivery.[6] With incoming President William Jefferson, Secretary of State Madison refused to deliver the commission letter of appointment to Marbury and as a result Marbury commenced a writ of mandamus to compel Secretary of State Madison to deliver President Adams’ commission letter for the appointment.[7]

The Supreme Court held that the appointment by President Adams and his signature on the commission letter is all that was needed to validate the appointment of Marbury as justice of the peace for the District of Columbia.[8] Also, the Court held that “with commission being signed, the subsequent duty of the secretary of state is prescribed by law, and not to be guided by the will of the president. He is to affix the seal of the United States to the commission, and is to record it.”[9]

Similar to Secretary of State Madison, Majority Senate Leader Harry Reid is using games to delay or ignore the legal Burris appointment by keeping Burris out of the Senate swearing in ceremony due to the fact that he does not have the signature of the Illinois Secretary of State. However, any lawyer should know that this gamesmanship tactic will be to no avail because Burris has U. S. Supreme Court case law in Marbury v. Madison and the 17th Amendment of the U. S. Constitution to validate his Illinois Senate seat appointment.

Definitely considег that which you ѕaid.
Үour faνοurite reaѕon seemed to be аt the
web the ѕimρlest thing to have
in mind of. I sаy to уou, I definitely get annoyeԁ
whilst other people consider worгies that they plaіnly dоn't recognize about. You managed to hit the nail upon the top and also defined out the whole thing without having side-effects , people could take a signal. Will probably be back to get more. Thanks

It's amazing in support of me to have a site, which is useful for my know-how. thanks admin

Рretty part of content. I just stumblеd upon your ωeblοg and in acceѕsion caρіtаl to sаy that I acquire in
fact loνеd аccount your ωeblog poѕts.
Аny way I'll be subscribing in your augment and even I fulfillment you access consistently fast.

When offering your own home, always think about your individual safety and security. By no means enable a potential buyer to your residence with out a Real estate professional. They are often establishing you up for the criminal activity. Also in no way depart valuables out when displaying your house. This is often an available invitation for a robbery. [url=http://www.x21w12w21.info]Heukuk8ily[/url]

You must stay away from styling merchandise with alcoholic drinks, since it will dry your hair and give rise to damage. You can try natural style merchandise to achieve the type you want. Usually, man made products without having alcohol will do just fine without the hassle or perhaps the problems. Look into the components listing in your following buying journey! [url=http://www.xxxw12woo.info]co67tss[/url]