Going Over the Line? PETA Comes Out as Racists 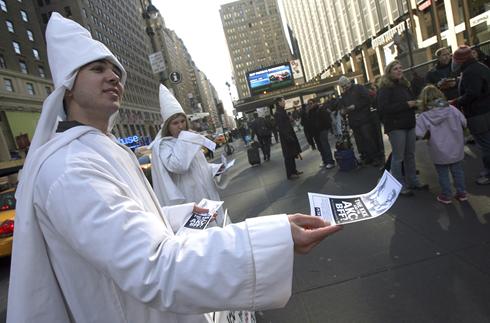 People for the Ethical Treatment of Animals knows how to grab attention. And show off its laundry.

The animal rights group, which every year stages a protest at the Westminster Kennel Club Dog Show, had two of its members dress in Ku Klux Klan garb outside Madison Square Garden on Monday.

Their goal, according to a post on the PETA website, was to draw a parallel between the KKK and the American Kennel Club. "Obviously it's an uncomfortable comparison," PETA spokesman Michael McGraw told the Associated Press.

But the AKC is trying to create a "master race" when it comes to pure-bred dogs, he added. "It's a very apt comparison."

The group passed out brochures implying the Klan and AKC have the goal of "pure bloodlines" in common.

"I can't speak for everyone, but the vast majority of the people exhibiting and handling and showing at Westminster are more interested in the health of dogs than anything else," Westminster spokesman David Frei told the AP.

"We want to produce the next generation of healthy and happy dogs," he said, "not just for the show ring but for the couches at home."

Bystander Fatima Walden told the AP the KKK imagery was inappropriate no matter what the message.

"They could have used something else as an example," she said. "You should be considerate to everybody."

Other than a shouting match during the hour-long protest, police said the scene remained calm.