African Americans Have The Highest Incarceration Rate In World 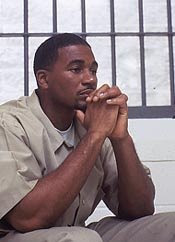 I’ve never agreed with the American criminal justice system. Point blank, it is wrong and unfair on too many levels. Since a youngster in New York, I have observed how our current system has destroyed more lives than it has protected, reformed, and/or rehabilitated.

To be considered the land of the free, the United States certainly boasts a dynamic air of hypocrisy. We have the HIGHEST incarceration rate in the world. In fact, the International Herald Tribune (owned by the NY Times) recently reported that “The United States has less than 5 percent of the world’s population. But it has almost a quarter of the world’s prisoners (READ HERE).”

Very few people seem to have a problem with this in middle America. More than likely because this alarming figure affects the Black community in widely disproportionate numbers. I would venture to say that most African Americans, myself included, can list someone within their immediate reach that is incarcerated. Yet ALL Americans turn a blind eye to the prison industrial complex that assists young brothers like myself in donning orange jumpsuits. In case you haven’t realized it, there is an entire system set up to fill and build prisons to the economic benefit of corporations and private ventures.

Posted by TheAssistant at 2:20 AM