Black Politics: Why The Troy Davis Case Must Be Studied 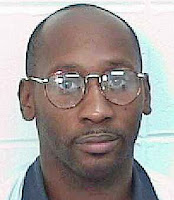 " I have faced execution and the torment of saying goodbye to my family three times in the last two years and I may experience that trauma yet again; I would not wish this on my worst enemy and to know I am innocent only compounds the injustice I am facing."- Troy Davis, from Georgia's death row, on facing a fourth possible execution date.

For those who are unaware, Troy Davis has been on Georgia's death row for about 18 years, after being convicted of murdering police officer Mark McPhail(Mr. Davis has maintained his innocence from the very beginning).

It would take pages to give all of the details of Troy Davis' case, however I will say that there was no physical evidence found(including a murder weapon) connecting Troy Davis to the killing of Officer McPhail; he was convicted largely on the basis of inconsistent and often contradictory eyewitness testimony. The vast majority of those prosecution eyewitnesses have since recanted or changed their testimony implicating Mr. Davis, and one of those who hasn't is Sylvester Coles, the main alternative suspect presented by the defense during Troy Davis' trial. In addition, there have been multiple allegations of police coercion and the usage of unethical interrogation techniques.

(For additional information on Troy Davis' case, or to get information on how to act, check out www.amnestyusa.org/death-penalty/troy-davis and http://www.troyanthonydavis.org/.).