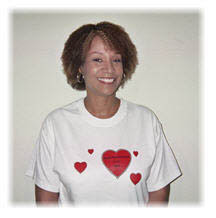 As a Black woman, I'm so sick and tired of every time there is a media story about HIV/AIDS, a Black woman is featured predominately front and center. For example, Black In America, which was watched by nearly 5 million people in CNN’s two-day airing, dedicated nearly the entire HIV/AIDS segment enforcing the poster person to be a Black female, but there are numerous other examples.

Making a Black female the face of HIV/AIDS is a radical form of racism at its highest level and more proof that there is a conspiracy to keep Black women without love. This image of Black women creates more negative stereotypes that Black women are diseased and along with being loud, fat, bitches and hos, who are overbearing, booty-bouncing, undesirable she-men, no wonder Black women are the least married; sadly unbeknown, Black Women Need Love, Too! (www.BlackWomenNeedL oveToo.com)

The trickery to take the stigma of HIV/AIDS from being a White male homosexual disease to being a Black female heterosexual disease is consistent with racism in America. I cannot allow this type of deliberate prejudice to continue, especially since this is a big fallacy and here’s why:

According to http://www.medicaln ewstoday. com/articles/ 113244.php , the fastest growing group of HIV/AIDS cases TODAY are young Black males between the ages of 13-24, which is quite upsetting since I'm the mother of a 13 year old son to whom I tell NOT to ever have backdoor sex, with a boy or a girl, because that high risk behavior is very likely to cost you your health and ultimately, your life. This is advice that must be spread wide and far to lessen the number of infections in the Black community and worldwide among all groups of people.

The latest so-called breakdown of HIV/AIDS infections (figuring in one of four who are undiagnosed, of course, the vast majority being added to the Black heterosexual tally) is as follows (www.cdc.gov ): 53 percent is homosexual and bi-sexual men, and trip this, 4 percent homosexual men that inject drugs, why not just say 57 percent?? Thirty one percent is high-risk heterosexual sex, which is code for backdoor sex. Ladies, DO NOT allow this even with a condom because condoms break easier in the anus than in the front door, and twelve percent is injection drug use. These are all the main transmission routes of such a deadly disease. Over 80 percent of women with HIV/AIDS got it from heterosexual high-risk sex.

Since the beginning of this epidemic (circa 1981) through 2005, only 19 percent of all HIV/AIDS diagnosis has been women and a mere 16 percent of women have died from this dreadful disease. In other words, 81 percent of all diagnosis is MEN and 84 percent of all AIDS deaths have been men. http://www.cdc. gov/hiv/topics/ women/resources/ factsheets/ women.htm# 3

HIV/AIDS is NOT a female disease! Black women have NEVER encompassed the highest number of HIV/AIDS cases—the quote was “Black women are the FASTEST growing group of HIV/AIDS”, which is no longer true, meaning Black women were growing in numbers fastest, but are not the most. Then why are Black women positioned predominately everywhere when this virus is discussed? The answer is RACISM and MISOGYNY at its finest.

Taking all this into consideration, backdoor sex accounts for nearly 82 percent of all transmission routes, but it seems everyone is afraid to tell the truth. I suppose, it’s easier to let people continue to contract and spread this disease and die? Ladies, common sense demands we stop booty-bouncing, booty posturing, and laughing at butt jokes, because this is not funny, people are dying!

I would like to remind everyone that I posted the high risk of backdoor sex on myspace.com blog over a year ago. I also contacted the Magic Johnson Foundation to alert the public about the huge hazard of backdoor sex, but of course, too many of us are more interested in being politically correct than telling the life-saving truth. Also, while conducting an interview on a popular blogtalkradio. com show, I was shocked and amazed by the arrogance of ignorance in regards to the dangers of backdoor sex. The response was my interview was banned because too many refused to acknowledge truth, and consistent with a popular mindset, defensiveness was the result. Lastly, I asked a friend, who is a gay activist (no confirmed cases of women to women or lesbian contraction of the virus) to help spread the word about the dangers of backdoor sex. I was told she couldn’t believe that people didn’t know the dangers of backdoor sex. Well, isn’t that quite obvious, due to the alarming rates of HIV/AIDS cases.

The arrogance of ignorance is mind-blowing, along with the fear associated with telling the hard-to-hear- truth is very disappointing and cowardly. Plus, it is like being an accomplice to murder for all the HIV/AIDS agencies to withhold the truth from the masses, when the obvious culprit (backdoor sex) is being hidden from the public at large.

So, I’m asking all of you to spread the word that RECEPTIVE BACKDOOR SEX is THE riskiest form of sex, whether performed on a male or female, and backdoor sex has at least a 50 times higher transmission rate than penis and vaginal sex. Plus, it is 500 times harder for women to spread this disease to men than it is for men to give it to women (deposit of teaspoons of semen vs. small slit in penis for fluid transfer). http://www.sfcitycl inic.org

Of course, AN ANSWER is using condoms, but it is not safe sex--only SAFER sex. Abstinence without injection drug use is the best way to stay clear of HIV/AIDS, but the species must continue via heterosexual front door sex, so let’s have safer responsible committed sex with someone to whom we know loves, honors, and cherishes us enough to NEVER cheat.

Also, it has been brought to my attention; males as well as females are participating in backdoor sex as an exchange for vaginal sex to prevent pregnancy. It's so very unfortunate that too many people don't understand the dangers of backdoor sex, which is much more deadly than getting pregnant. It’s safe to assume, they use no protection.

BTW, the number one cause of death for Black women between the ages of 24-35 is HIV/AIDS, so ladies you have been warned! The fact is, too many Black women are having too much backdoor sex. Black males have told me they didn’t know that a Booty-Call meant front door sex, so they went for the backdoor thinking it was the “in” thing to do. And Ladies, when dealing with men who have served time in jail, do not have any sex with them until you KNOW they don’t have HIV/AIDS by getting tested.

Everyone must participate in educating our family members, friends, and associates with this life-saving article. Without HIV/AIDS, young Black women would be among the healthiest.

Pearl Jr. is an author, activist, journalist and producer. She is is a member of the National Academy of Media Arts & Sciences. She has authored three books, one documentary and has successfully ran four websites (award-winning) and serves as the founder and owner of Elbow Grease Productions (EGP) and Pearl Jr. Publications. She is best known for her work in the African-American community. She is a long-time activist. As an activist, Pearl Jr. has successfully challenged major corporations to respect the Black community, she has protested and forced major corporations such as Nissan Motors, Ebay, and the NAACP to change their ways to better represent a positive image for African-Americans. Pearl Jr. has also leads the charge consistently against negative rap music. She writes widely published articles such as, "The Rap Crap Treason Act" and "The Golddigger lie leads to Black Male Failure," which has awaken the sleepy giant in the hearts and minds of the Black public. She runs the websites: TRUtalk.us, MichaelJacksonInsider.com, and BlackWomenNeedLoveToo.com
Posted by T O at 2:41 PM