Your Black World Speaks With Dr. Ricky Jones On Issues Of Concern 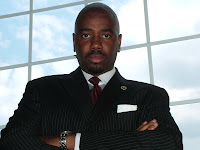 Dr. Ricky Jones is an Author, Columnist and a Professor at the University of Louisville. He is the Chair of Pan-African Studies at the University of Louisville. He has written several books including, "Black Haze: Violence, Sacrifice, and Manhood in Black Greek-Letter Fraternities," and the more recent "What's Wrong with Obamamania?: Black America, Black Leadership, and the Death of Political Imagination." He is also a Lecturer who has spoken courageously on the neutralization of Africanism and Pan-Africanism in the European landscape. On Barack Obama, Dr. Jones believes that the Senator hasn't quite paralleled the standards and criteria set by the legacies of Martin Luther King, Kwame Ture and Malcolm X. He also laments the reality that some black people might be missing the point with a blind and unconditional support for Senator Obama's candidacy. His newest book - on Obamamania - investigates the unhealthy celebration and craze that has clouded the Obama campaign, while tendering useful and applicable resources that strengthen the structure of governmental-accountability. I had the pleasure of engaging in dialogue with Dr. Jones on Black Leadership, Obamamania, Black Politics, Black Masculinity and much more:

Thanks for joining us, Dr. Jones. Can you begin by informing us of your background and the pathway leading up to becoming one of the State of Kentucky's most prestigious professors?

I don't know if I'm one of the state's most prestigious; but I grew up in the housing projects of Atlanta, Georgia. After High-School, I got a bachelor's degree in political science from Morehouse College, and then received a fellowship-offer from the University of Kentucky - where I met Boyce Watkins. But I went to UK (Kentucky) for graduate school, and got a PH.D in political philosophy, and then left in 1996 for Louisville -- where I joined the Pan-African study department, and I have been there ever since. It’s funny because I really didn't intend to stay there, but I ended up in a really good department with some really good people, and had a lot of opportunities, and ended up becoming the youngest 'chair' in the history of the department -- a term which I just finished.

In your opinion, what is fundamentally wrong with today's Black leadership, and how radically different is it from that of Malcolm & Martin's era?

Well, a couple of things: One; the social and political dynamic is very different now, than it was in the past. We are now in a time when we are the first generation of Black folk who did not have to deal with slavery or segregation. And, I think it threw Black America into a state of confusion vis-a-vis understanding power-discrepancies, segregation, discrimination, marginalization etc. And just because those systems weren't in law anymore, didn't mean it did not exist. And with that change in the political landscape, people are not clear anymore, as to whether or not we have a structural problem, or we have merely individual problems. So with the comments of the "Bill Cosbys" and "Shelby Steeles," (The Black Conservatives) it becomes more easy to put the blame on Black people, individually, than to attack structures -- especially if you're trying to gain power in those structures. So, there is a misunderstanding of the political landscape. Also, there is a problem with the quality of leadership. Sometimes, we do not have our best and brightest in position. Another problem is that of commitment, especially when you have folk that are much more wedded to their personal agendas, than they are with any collective agenda that has to do with Black folk. When you put all those things together, you have a horrible mixture that leads the majority of Black people suffering.

In light of the recent conundrum Rev. Jesse has been encompassed by; do you find any legitimacy in the inference that a leader can become outdated and irrelevant?

Yes, but not specific to Rev. Jackson. I think, sometimes, if not the leadership figure itself, the strategy can become outdated -- and again, not being specific to Rev. Jackson. I've been critical of Rev. Jackson with regard to certain issues, and I criticize him in my latest book, but I think the latest criticism of him - with what has been said - is patently wrong. I think it is problematic for Black to dismiss Rev. Jackson at this point. In my latest book, I discussed that 'shift' in the generations. I think it is true that the younger Black leadership is different, but we also ought to question, if the shift is better -- and that question is not necessarily being asked. I also think that style of leadership is embraced by much of white America because it is looked upon as safer, and sometimes more "white-like." One of the first line of my latest book is, I'm Black and I worry about my people," and the last line is, "in the mean-time, I'll still be here worrying," because I'm very worried about Black America's willingness to embrace some of these unknown quantities in a non-critical way, and dismiss folk who have a long history of service to the Black Community. When you look at the antagonism toward Jesse Jackson, it's disturbing; also, with regard Tavis Smiley -- where a large number of Black people turned on him and called him some of the most reprehensible names. What's most disturbing is the fact that Black people are reacting this way, in support of a man who, 4 yrs. ago, excluding Chicagoans, was nearly unknown. And the fact that, till this date, he still hasn't shown that he has any level of commitment to any particular agenda that has anything to do with remedying Black struggle; he is much more likely to condemn black folks, than he is to condemn systemic mechanism that are beating up Black folk.

You wrote a book in critique and cross-examination of Sen. Obama's explosive rise to the front-and-center of American political life. Can you explain "What's wrong with Obamamania"?

Concisely, there are 4 basic things: One is that the examination of Obama and his significance has been relatively immature. You have a side that paints him as a savior and Messianic figure, and others who hope to label him as an Islamic terrorist. And that dichotomization doesn't leave room for rich political discussion. Secondly, there is very little serious-examination of what Obama means on the leadership landscape -- for Black America in particular and America in general. And when he is compared to Dr. Martin Luther King, we have to understand that Dr. King never represented the status quo, and sadly, Obama seems to be comfortable doing that. Thirdly, with Obama's avoidance of issues concerning Black America, we would be foolish not to ask for as much as other groups are demanding of Senator Obama. The Jewish Community asked Obama - and other candidates - where he stood explicitly on the issue of Jerusalem, Palestine, and other issues. Black people must be brave enough to ask the same questions: Disproportionate Imprisonment, the educational system, disproportionate poverty - with a third of Black children being impoverished etc. And if we are concerned about those issues, we should take him to task on each one of them, and we have not. Fourthly, most Black supporters are much too eager to attack anyone who criticizes Senator Obama or his agenda -- which is dangerous, in giving him a free pass.

Malcolm X, in his April 12, 1964 speech "The Ballot or The Bullet," called for political maturity within the Black Community. In your assessment; has there been any political-maturation in Black America, and is it - or the lack - reflective in the overwhelming support of Sen. Obama's candidacy within the African-American Community?

Well; to answer bluntly, we are certainly showing some political immaturity. I also think it shows a division with the Black petty bourgeoisie and everyday black folks. Come election time, I would be voting "against McCain," because I have been disturbed by the lack of serious-public-balanced-dialogue in Black America -- concerning the good things he (Obama) brings to the table, as well as the bad.

Masculinity in Black America is another subject you have written greatly about. How does that paradigm play out in Hip-Hop culture and the daily lives of everyday Black families?

Well, this goes to my first book: "Black Haze: Violence, Sacrifice, and Manhood in Black Greek-Letter Fraternities." And the big question is: What happens to a group of men who are denied traditional avenues to being labeled as Men. I'm referring to, 'going to better schools,' 'getting the better jobs,' 'being able to earn salaries that are conducive with supporting and protecting their families.' So, how do they define their Manhood, if those traditional routes that guarantee the definition of Manhood are denied to them? And I see that phenomenon playing out of Black America in so many ways. It plays out in Black fraternities - with Greek Origin - as well; and some of the barbarism that plays out in some of these fraternities puts the Manhood of these young men on trial. And the only way they seem to define their Manhood, is through the infliction of pain, stress or the tolerance of it. You also have the same dynamic playing out in the gang-culture. We have to figure out where all this factors - of the destructive definition of Masculinity - lead up to. And it plays out from education, to the home-environment, to poverty, to political disenfranchisement, to the criminal justice system and even toward mental health issues. So, I'm very concerned about Black Males interaction with society, with fellow Black Males and finally, their Women.

You teach Pan-Africanism and color-consciousness as a Professor at the University of Louisville. Do you suspect a loss of cultural-pride amongst the upcoming generation of Black and Brown kids?

Most definitely, but I think it stretches-through, to all of us. Because, you never see anybody else - for the most part - run away from their ethnicity and race -- as much as Black people do. Many Black people see their heritage as a badge of shame -- as a result of our socialization in this country. And there seems to be very little commitment to anything deemed patently Black. And it’s also playing out in this election cycle, because if one speaks of Obama as being Black, his supporters ask the question: "Why you got to bring 'race' into it"?

Well, it should be, ideally, to be able to translate classroom academicism, and put it to the public, streets or television. So, it's incredibly important that we don't have these conversations limited to the college campuses. The intellectual must be able to convey to the public, certain values that the public understands.

Lastly, what advice do you have for the new generation of Black intellectuals and academicians?

Well, it must be to carve out our own path, and stay true to some set of ideals. At the end of the day, we are teachers, and the fundamental question is: What are we going to teach? I think a lot of folk see the public intellectual route as a track towards stardom, but the ideal that one is committed to, the ability to change the life-worth of Black people, and the will to improve the conditions of Black people with writing, speaking and advocacy, is most important. The new generation of Black public intellectuals should also look out for one another, and take care of each other.