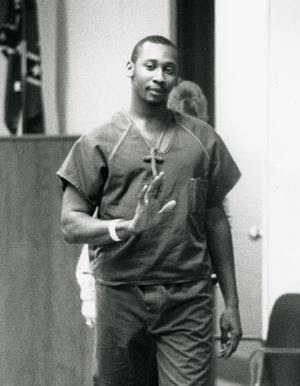 
If it was up to the Chatham County Sheriff’s Department and the Georgia Board of Pardons and Paroles, Troy Davis would, at this moment, be an after-thought. As a matter of fact, he would have been executed as early as July 17, 2007. But due to the effervescent work of the international coalition of supporters, family and friends, who insist his innocence, Troy Davis is still believed to have a fighting chance at not only clemency, but exoneration. Since his conviction in 1991, Davis has remained on Georgia’s Death Row. The case of Troy Davis is one which has rallied international support and garnered national attention. None other than President Jimmy Carter and former Sen. Bob Barr are among that diverse group of supporters who seek clemency for Troy Davis. As Carter and Barr see it, “proper level of fairness and accuracy required for the ultimate punishment has not been met in Davis’ case.” Troy Davis is also fortunate to have a sister such as Martina Correia. Martina, a cancer survivor, has worked tirelessly, night and day, for the opportunity to witness, someday, her brother walk free again. I had the honor of speaking with Martina on the case of her brother, which, as she describes it, “is transcending across continent-lines.”

Thanks for being with us, Martina. Can you start by telling us - what you can - about Troy Davis -- before the incident in 1989?

Before the incident, Troy was a young junior coach for the police athletic league; he did things in the community, always helping out little kids and people that had problems. If there was any problem, he would try to solve it. He used to line up the kids in his league, and buy them Ice-Cream and other snacks. But Troy spent most of his time at home, because I had a sister who was paralyzed from the neck-down, and Troy went to night school and worked. When my mother was working during the day, Troy took care of my sister. When he worked, he pretty much gave my mom his entire paycheck – eating hotdogs and soda for lunch. That’s the kind of person that he was.

What was it that took place on that fateful day in 1989?

In 1989, Troy was actually preparing to go back to Atlanta because he had been waiting on a delay-entry program into the army corp. His vehicle was broken down, so he decided to work on a construction site to get the money to fix his car. That specific day, some of his friends talked him into going downtown to play some pool, and when they got there, an altercation took place between a homeless man and a drug dealer. When my brother heard about the incident – doing his normal “Troy-Davis-Batman” thing – he and a 16-year old were walking up the street to try to intervene. When they got to the scene, they saw the drug-dealer pistol-whipping the homeless man. The drug dealer then turned his gun on Troy and the 16-year old with him; so Troy and the 16-year old took off running. At that time, the girlfriend of the homeless man ran into the station, asking for help; so a police officer came outside yelling to the person in the parking lot, who then shot and killed him. The drug dealer then ran away, threw his gun away, and changed his clothes. 15 hours later, the drug dealer showed up at the police station with a lawyer, saying that Troy had committed the crime.

What about the fact that most of the witnesses who initially accused Troy of being the murderer have recanted their stories, except for one – who is believed to be the actual killer?

There were 9 eye-witnesses used against Troy. Seven of them later stated that they either had either lied or were forced/coerced by the police to testify against Troy. One of them couldn’t read or write, so he signed a statement that the police should type for him. A couple witnesses were on parole or probation; a couple of them were 15 or 16-year olds. They were interrogated for 6 or 7 hours without any attorney or parents. The homeless man was refused medical treatment until he falsely admitted that Troy did it. The 8th witness who did not recant his testimony said that the only thing he knew was that the shooter was left-handed, and Troy is right handed. The 9th witness is, of course, they guy believed to be the actual shooter. 9 additional witnesses, who have not been heard in court, also came forward and said the drug dealer was the shooter. They either saw the murder first-hand, or he bragged about it to them. And one of the people who saw the murder first-hand was his actual nephew, who signed an affidavit against him.

What has the road been like since 1991, when the jury found Troy guilty?

When Troy was convicted in 1991, Newt Gingrich funded a resource center. So Georgia is the only death penalty state where you do not have to have a lawyer for post-conviction appeal, and they actually held that first heinous hearing in the prison. From 1991-1996, Troy had no attorney. You had one attorney from the resource center trying to handle 90 death-penalty cases, and the only time they could do anything was when something was filed. In 1996, when we got a lawyer, and some money - with witnesses coming forth and recanting their stories - President Clinton signed into law the Anti-Terrorist and Effective Death Penalty Act (AEDPA) -- which said that one has one year from conviction to prove innocence. President Clinton made it retroactive 10 years, which was against International Human Rights Law. So when Troy’s lawyers started coming forward with affidavits and filing claims of innocence, the court said “you should have brought that in 1992.” Well, the law wasn’t even in effect until 1996. So we got entrapped by a legal technicality, and that’s what we’ve been fighting. The witnesses who claim Troy is innocent came before the parole board and were told by the District Attorney, that if they changed their story they would go to jail and face perjury. Even though they still face perjury now, they came forth and testified. Three of the five members of the parole board are police officers themselves; two are former prosecutors. The parole board rules in secrecy, and are completely unaccountable.

When is the slated execution date for Troy Davis?

What kind of activities would you be involved in, leading up to September 23rd?

We would be holding rallies and diverse events in Georgia and beyond. Rev. Al Sharpton and Pastor Warner from Ebenezer Baptist church just held a successful press conference for Troy.

What kind of help have you been offered, with regards to your fight against the execution of your brother?

We’ve had national and international support; people have been faxing and calling the parole board – asking for reconsideration. President Jimmy Carter and Former Sen. Bob Barr have come forward saying it is not right that innocent people are executed. Over 380,000 faxes have come in so far, and they are still trying to flex their muscle.

You are battling cancer, Martina, and were honored alongside Nancy Pelosi last year. How are you doing right now?

I was diagnosed with Advanced Metastatic Breast Cancer in 2001, and was given 6 months. I take chemo on a weekly basis, and I have for 71/2 years. I asked God to allow me to fight for my brother and see him walk free; so I’m still battling. I do a lot of work in my community. I am the Executive director of the Savannah coalition of The National Black Leadership Initiative on Cancer (NBLIC). Since the doctors suggest that I don’t go back to work, I volunteer all my time. Within the last 3 years, I have gotten close to 50 National and State awards for my work on cancer, but that’s not why I do it. I do it because inadequate healthcare, or no healthcare at all, is a Human Rights issue, and I’m a Human-Rights defender. I don’t get paid for what I do, but I try to make a difference so that my battle would lead to a better life for my child, and other children coming up behind me.

You have been visiting Troy recently. What is his state of mind?

It’s amazing, because Troy says that he’s in a secret place with God, and that nothing they can do can harm him. The only thing they can do is take his physical form. Troy has received over 50,000 letters within the last year, and when we left him today, he was talking about footprints, and how this is the moment when God is carrying him. He said he’s not bothered about Monday or Tuesday, but rather walking out of jail a free man.

It’s a little bit strange that you just said that, because when Stanley “Tookie” Williams was about to be executed, he mentioned the kind of peace that Troy seems to be experiencing. But also, we have precedents with the cases of Mumia Abu Jamal and Kenneth Foster. Do you have hope that his life would be speared, and possibly exonerated?

Of course I have hope. If I didn’t, I wouldn’t be fighting as hard as I am in exposing the system for what it is. I got a call yesterday from some gentlemen on San Quentin Death Row. They were calling because they wanted to say a prayer for Troy. They said that Troy’s case is making room for them. Troy’s case is transcending across continent-lines. I was in France, and every Wednesday, they had three tables set up downtown for Tookie Williams, Mumia, and Troy. I’m confident that we would win, and no matter what happens on the 23rd, we would win; and my brother understands that. No matter what happens, I wouldn’t be deterred in my fight against the death-penalty.

What can the general public do to avert this injustice?

We want people to go to TroyAnthonyDavis.org, and sign the online petition. They can also text the word “TROY” to 90999. We also need as many people as possible to call the Governor’s office and the parole board all day on Monday, asking them to reconsider. Call your Senators to speak forward. CNN and Nightly News have, for a while, wanted to put together a story on Troy, but the jail is not permitting him to conduct any interviews. We need people to flood CNN with calls, urging them to do the story regardless. We need people to start saying, “I AM TROY DAVIS.” Faith without work is dead, so we need work to be done. Don’t wait until Troy becomes your brother, cousin, nephew, father or even, you. What we tell people is that, you have to do something.

For more on the case of Troy Davis, visit: