Your Black Politics: Organizing The Community: Why The GOP TREMBLES At The Very Idea 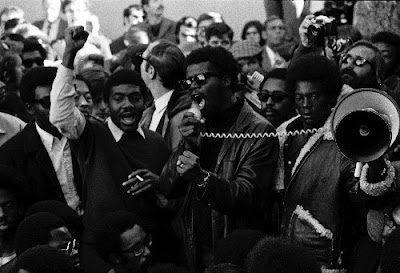 “Before I became governor of the great state of Alaska, I was mayor of my hometown. And since our opponents in this presidential election seem to look down on that experience, let me explain to them what the job involves. I guess a small-town mayor is sort of like a "community organizer," except that you have actual responsibilities.”

- Republican V.P. Nominee, Sarah Palin, in her acceptance speech at the RNC.


When the enemy of the state is community organizing, it is sufficient to acknowledge that the world as we know it is, indeed, coming to an end. To arrive at such a conclusion, one would have to deliberately skip over the Public Enemies of the 21st century - corrupt government, predatory mortgage lenders, failing schools, poverty, imperialism, neo-colonialism, drug-trafficking, inequality - and claim that the oppositional forces of good are the Taliban equivalent in the war against “domestic terrorism.” Terrorism, described as “the use of violence and threats to intimidate or coerce, esp. for political purposes,” is clearly more in sync with the two big-name political parties’ attempt to cage dissent (at their pricy conventions), than the very factors which try to make the world safer for the most vulnerable. The unadulterated buffoonery of the GOP was unmasked last week, as their effort to give community-organizing a bad rep fell flat on its face – just as their lame attempt to be re-branded as the party of “change.”

Ask anyone who knows something about struggle, and they’ll tell you that Community Organizing is the bedrock of any successful movement. Community Organization in the U.S. stretches far back to the 1700s and none other than the founding fathers of this very nation were active community organizers. Through the frustration and agitation expressed by their communities, they commissioned a plan to demand - from the British Overlords - representation in return for taxation. When Sarah Palin and her counterpart, Giuliani, made light of the very practice, they repudiated the configuration of their beloved homeland. The New American Standard translation of the popular biblical passage, Hosea 4:6, notes, “My people are destroyed for lack of knowledge. Because you have rejected knowledge, I also will reject you from being my priest.” For a party which claims to be soaked in the Christian tradition, it shouldn’t come as a surprise why their moral standing in the country is lower than the Bush administration’s approval rating.

More than the partie’s despicable disregard for civil and human rights, the uncompensated folly of the GOP was unraveled for the world to see. As a famous blogger noted following Palin’s speech, the party which claims to champion civil rights heroes such as Rosa Parks, Rev. Dr. Martin Luther King and Mohandas Karamchand Gandhi, did little research to discover what the primary vocation of those great icons was. “A nice little African proverb for her [Sarah Palin] is that a single bracelet won’t jingle. They [the GOP] sit in their little convention and praise people like Rosa Parks and Martin Luther King Jr. both of whom were those pitiful community organizers that they find so funny and sorry. It is interesting that before putting the speech together they didn’t bother to actually find out what a community organizer does and how they don’t collect money to help people. I guess to McCain and Palin the only time a person deserves their help is if they are getting paid or have a bunch of power behind it that they can abuse.”

Community organizing matters in the most fundamental way, and whether the feeble minds of Gov. Sarah Palin, Rudolph W. Giuliani or the GOP can comprehend this reality or not, neither women nor Italian-Americans would be in high-places of political power, if not for the effervescent work of community-organizers, who have made limited but lasting strides in breaking the back of White-Male supremacy in this society. Perhaps the GOP acronym stands for, “Generated on Pointlessness.” One reason the “Grand Oil Party” trembles at the sheer sight of organized communities, is the reality that with a united front, nothing is perceived as impossible. When the Black Panther Party made an objective out of strengthening the Black and Brown communities, then-Director of the FBI described the Party as “the greatest threat to the internal security of the country.” Ever since, the FBI, in conjunction with the Democratic and Republican Party, has been supremely instrumental in arresting the development of radical initiatives to the two-party system.

Last week, Black Commentator Editorial Board member and Black Panther Party veteran, Larry Pinkney, was awarded two prestigious awards for his irreducible labor in the Bay Area Communities and beyond. Community organizing is a perpetual and potent threat to the propaganda, prevarication, and “politricking” of ruthless politicians. So it came as no surprise that Bush’s Party would utilize the rare moment of public interest, to rally against their Public Enemy no. 1: Community Organizers. The GOP’s vengeance is warranted, with the understanding that it took the unpaid toil of Community organizers to hold the feet of the government to the fire, post-Katrina. Living legends of this cause such as, Malik Rahim, Rosa Clemente, Sess 4-5, Dhoruba Bin Wahad, Mumia Abu Jamal, Kathleen Cleaver, Jamal Joseph, Ernie Paniccioli, Cynthia McKinney, Larry Pinkney and Professor Griff, make the world go round. Without their support, many communities would be subjected to a state of unmitigated shambles.

The idiocy of the Republican Party notwithstanding, more shocking was the response by Illinois Senator and Presidential hopeful, Barack Obama. At a news conference in Pennsylvania, Obama replied to a question from a CBS News reporter, saying, “This is very curious. So this is work I did [20] years ago. They haven't talked about the fact that I was a civil rights lawyer; they haven't talked about the fact that I taught constitutional law; they haven't talked about my work in the state legislature or in the United States Senate. They're talking about the three years of work that I did right out of college as if I'm making the leap from two or three years out of college into the presidency.” I would recommend that Mr. Obama take more time out from his daily activities of campaigning and “stump speeching,” to reflect on the weighty load placed upon Community-organizers worldwide. The experience of a Community-organizer is unparalleled. If Sen. Obama views those “three years” as ordinary and unworthy of critical acclaim, this could be the defining moment in his campaign for “regular votes.” While belittling and downplaying his Community-organizer credential on the one hand, Sen. Obama utilized Palin’s attacks for his political good, by raising $10 million in 24 hrs, following the female governor’s V.P. acceptance speech.

If $10 million dollars was raised in 1 day, as a political reactant to the snarky, insolent and belligerent attacks of Gov. Palin and Rudolph Giuliani, the equivalent for Community-organizers should be the restoration of 10 million homes in 1 year. To paraphrase Mayor Giuliani, Community organizing is a “problem” to the status quo. It’s time for more organizing.