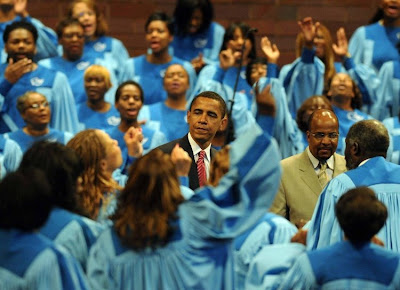 “In Chicago, sometimes when I talk to the black chambers of commerce, I say, ‘You know… A good economic development plan for our community would be if we make sure folks weren’t throwing their garbage out of their cars.’”

“Y’all have Popeyes out in Beaumont? I know some of y’all you got that cold Popeyes out for breakfast. I know… You can’t do that. Children have to have proper nutrition. That affects also how they study, how they learn in school.”

“The previous generation, the Moses generation, pointed the way. They took us 90% of the way there [to equality]. We still got that 10% in order to cross over to the other side.”

“But if we are honest with ourselves, we’ll admit that what too many fathers also are is missing – missing from too many lives and too many homes. They have abandoned their responsibilities, acting like boys instead of men… You and I know how true this is in the African-American community… Yes, we need more jobs and more job training and more opportunity in our communities. But we also need families to raise our children… Any fool can have a child... [D]on’t just sit in the house and watch ‘SportsCenter’ all weekend long.”

…“We’ve all said in the black community, we don’t see all of who we are in, in the media. We see snippets… of our community and distortions of our community. So the world has this perspective that somehow Barack and Michelle Obama are different, that we’re unique. And we’re not. You just haven’t seen us before.”

“[T]here’s always… doubt in the back of the minds of people of color, people who have been oppressed, who have never been given the real opportunities that you never really believe, that you believe somehow that somehow someone is better than you, you know deep down inside you doubt that you can really do this cause that’s all you’ve been told is no… And I think it’s one of the horrible legacies of racism and discrimination and depression you know it keeps people down in their souls in a way where you know sometimes they can’t move beyond it.”

A close look at the above-listed quotes would strike a curious chord in the reader. How can it be that a married-couple with identical political characteristics provoke such discord in their views on Race, and Black identity? After much deliberation, I’m convinced that President-Elect Obama’s disturbing perspective of the African-American community is not motivated by malice or cowardice, but simply a result of his upbringing. In other words, his distinctly condescending attacks on Black consciousness are merely a product of the overwhelming, disproportionate influence his White mother and White grandparents had on him. In contrast, Michelle Obama, raised by Black parents and nurtured in the womb of Black America, is prone to persuade a more empathetic view of the African-American community. It is virtually impossible for Barack Obama to have emerged from the loving arms of a woman who, “once confessed her fear of black men who passed by her on the street, and who on more than one occasion has uttered racial or ethnic stereotypes that made me cringe,” and not have inherited some of such Negrophobia, which has cast dark shadows on Black male psyche. In Just Walk on By, Author, Brent Staples wrote of the degree of “lethality nighttime pedestrians” attribute to certain Black males who fit the kinds of cringe-worthy stereotypes which Obama’s grandmother (God rest her soul) must have expressed constantly. The impact of this on the young Barry cannot be overlooked.

Obama was also never immune to the toxic wrath of White-supremacy as a child. Whilst being called “Negro” at school, it is reported that he was “teased more than any other kid in the neighborhood - primarily because he was so different in appearance.” A neighborhood friend recalled how Obama, as a young man, was “built like a bull. So we’d get three kids together to fight him.” An outcast amongst his lighter-skinned friends, he was once thrown into a swamp, when a group of neighborhood rascals grew disturbed that he had decided to tag along with them. Being Black, in this young man’s mind, must have resonated more as a negative, than a positive. It is inconceivable for a love-starved bi-racial kid to undergo such traumatic experience, without incurring an indelible stain of self-hatred. It is in this vein, I believe, that President-Elect Obama attempts to win a battle with his childhood, by scapegoating the Black Community.

Barack Obama’s nonchalance toward Black folks can also be a product of his elite educational background. It is no secret that Ivy-League institutions, such as Harvard and Princeton, promote a deficiency in diversity, vis-à-vis the student/faculty body. Having bathed in the muddy waters of a racialized childhood, it is no insult to suggest that Obama was baptized in the Holy waters of white-dominated institutions, such as the Harvard Law Review, to cleanse all remembrances of his “dark” past, and start anew. On the other hand, Michelle Obama, though privileged with an equivalent share of elite education, had a much different take on life at diversity-deprived institutions: “Predominately White universities like Princeton are socially and academically designed to cater to the needs of the White students comprising the bulk of their enrollments… My experiences at Princeton have made me far more aware of my ‘Blackness’ than ever before. I have found that at Princeton no matter how liberal and open-minded some of my White professors and classmates try to be toward me, I sometimes feel like a visitor on campus; as if I really don’t belong.” It is, at this point, clear that the singular difference between Barack and Michelle’s racial ideologies is the background which supports them.

It must be noted that Sen. Obama’s irrational display of self-hatred is not an anomaly in a community literally taught to hate itself. Just this past week, TV Judge and Activist, Judge Mathis, hosted a Black Woman who claimed that 90% of the Black Women she had encountered embarrassed her so much that she often hoped to be white. Mathis, growing disgusted, recommended that this particular lady, just “get her face bleached” and get it over with. Mathis then felt the urge to question her: “If you could kill yourself and come back as white, you would do it, wouldn’t you?” And to total shock of the studio audience, the plaintiff responded in the affirmative, “Definitely.” Regrettably, this attitude is not uncommon to the Black experience in America. It has scarred the fabric of our humanity for generations, since slavery. Many historians would agree that every ailment which afflicts the conditions of Black America today is directly traceable to the horrific conditions that buried the dignity of Black folks for 400 years, and beyond. Self-hatred has proven to be a successful escape route for those Blacks/Browns seeking repair to their damaged self-esteem. This is why a president, who values the humanity of people of culture/color, must be acutely aware of the words he/she chooses in remonstration against such communities. If Barack Obama is unaware of this reality, well-informed counsels such as Michelle Obama and Valerie Jarrett must take a personal interest in educating him.

And now, to President-Elect Obama or any campaign staffers reading this: There’s only a certain amount of discomfort the Black Community can afford after being robbed of its culture, identity, intellectual contributions and pride. Many African natives come to the American shores and thrive in ways that, unintentionally, insult the dignity of their African-American family. This ability for African success in a foreign land often stimulates the claim that the problem lies not in the practice of racism, but indecision, by Blacks in America, to pick themselves up by their bootstrap and take personal responsibility for their actions.

Such inference is an assault on the legacy of the not-so ancient history of legal/physical slavery, which consistently strides to stifle the potential of Black/Brown peoples in our society. We did not ask for this. This truth, however, escapes many white brothers and sisters, who act as though Black people are preoccupied with excuses, and possess a fundamental lack of determination for success. President-Elect Obama, it is incumbent upon you to arrest this notion. Not advance it. The reason Black folks are so enamored of the concept of a Black presidency is because they have searched, endlessly for a public official who can take into account the integrity of their dignity and contribution to society. If the next administration is unable to do so, there is little hope left for this democratic experiment.

To anti-Obama Black progressives: President-Elect Obama is our brother – even though he’s acted in ways that contradict this reality. Whilst he might not exhibit an impassioned concern for the Black Community, his background mirrors one oh-so many of us were enshrouded in. I propose, humbly, that Obama be forgiven for his rabid attacks on the Black Community, and granted a chance at redemption. There’s no doubt that his outspoken, generalized and unilateral critiques of Black folks are unmerited. But I am convinced, however, that deep-down, he appears to hold dear the conscience of the Black Community. What our brother, President-Elect Obama deserves is re-education, not retaliation. For a man who, at childhood, was deprived substantive interaction with the other side of his DNA, there’s certainly much need for a reorientation of who/what the Black Community is.
Posted by T O at 4:30 PM